Although many will have heard of osteoarthritis and rheumatoid arthritis, there are several different types of arthritis. ‘Arthritis’ simply means inflammation of a joint and the causes are many.

The pattern of joint involvement, the patient’s age and gender and the medical and family history all provide clues to the type of arthritis an individual patient may have. The spectrum of severity is enormous and the treatments vary accordingly. Some patients may have a mild form of arthritis and rarely require medications. Others may have a more severe condition that requires drugs to help slow down progression and ease the classical symptoms; pain, swelling and stiffness.

An important general principle is to make a diagnosis early so that treatment can be initiated promptly, if necessary. 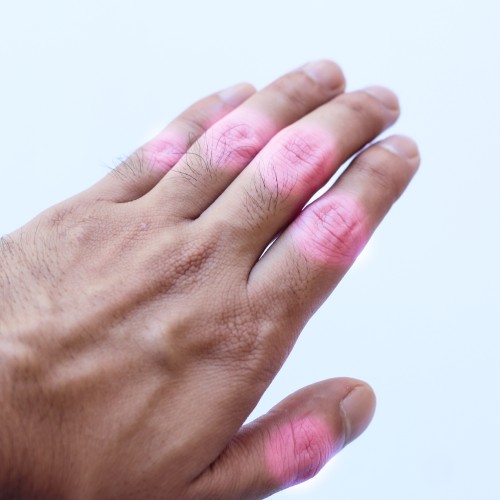 Here are some of the more common types of arthritis:

This is the commonest type of arthritis mediated through the patient’s immune system – an autoimmune condition. It may present at any age but is commonest in 25-50 year olds and it’s 3 times more common in women. The target tissue is the lining of the joint, called the synovium, and ‘synovitis’ is the name given for inflamed synovium.

Many different joints may become involved, most typically the finger joints, the wrists, the knees and the toe joints. With an inflammatory arthritis such as RA, symptoms are usually worse at rest rather than with activity. Joint pain may disturb a patient’s sleep and there is often a lot of pain and stiffness in the mornings and after periods of inactivity.

RA is a chronic condition, meaning it is long-term and we don’t have a cure. But, it is very treatable and the modern management of inflammatory joint diseases like RA has been one of the great medical success stories over the last 20 years.

Typical drugs that may be prescribed include non-steroidal anti-inflammatory drugs to ease symptoms (such as Ibuprofen, Naproxen, Diclofenac, Etoricoxib) and the disease modifying anti-rheumatic drugs (DMARDs, such as Methotrexate, Sulphasalazine and Leflunomide), which are used to suppress the inflammatory process and prevent joint damage. The introduction of ‘magic bullet’ drugs, which target individual messengers of inflammation, such as TNF, has been a huge advance. These drugs can be used very successfully, though they are expensive and tend to be used in patients with more severe forms of RA.

We generally try to avoid the long-term use of steroids, but they can have a very important role in getting on top of inflammatory arthritis in its early stages. A rheumatologist may offer an intramuscular steroid injection, which will suppress inflammation within 24 hours and ease symptoms quickly. Weight gain and other side effects with this type of steroid administration are unusual.

One of the most significant observations we have learned over the last few years is the importance of early diagnosis and treatment. If we treat RA aggressively in it’s early stages, then patients tend to have a much better prognosis with less chance of future joint damage. Thanks to rapid treatment and using better drugs, the outlook for patients with RA has changed dramatically over the last two decades. Thankfully, the days of joint deformities and joint operations are almost over.

This type of arthritis is seen in about 15% of the population who have the skin rash called psoriasis. Even a tiny amount of psoriasis – perhaps seen on the scalp, knees, elbows, buttocks, genitals or the nails – can be associated with this inflammatory arthritis which often sees a lot of tendon involvement.

Some patients may have swelling of a whole toe or finger, termed “sausage digit”, other patients may develop inflammatory pain and stiffness of the spine. Treatments depend on the type of joint involvement but are quite similar to those used in RA. Methotrexate, Leflunomide and the anti-TNF drugs can all be very effective. Tendon inflammation may be less responsive to oral drugs and may require injections. Topical treatment of the skin rash has no effect on the behaviour of the arthritis.

This type of arthritis, now referred to as Spondyloarthritis, is more commonly seen in men aged 18-35 years and usually has a genetic background. Inflammation of the two sacroiliac joints – between the sacrum of the lower spine and the ilium of the pelvis – leads to pain and stiffness in the low back or buttock region. The pain often wakes the patient at night and spinal stiffness is prominent in the mornings. Activity usually helps and, conversely, inactivity will exacerbate symptoms. Anti-inflammatories, such as Ibuprofen and Diclofenac, are usually effective. If left untreated, it may lead to permanent stiffness of the spine. AS may be associated with other inflammatory conditions, such as uveitis of the eye and colitis of the bowel.

The mainstays of treatment are exercise programmes focusing on maintaining spinal mobility. For patients with a more severe form, anti-TNF drugs – which target the pro-inflammatory messenger called tumour necrosis factor – can be very effective. These drugs are expensive, though they are available in an NHS setting for any patient with severe and unresponsive AS.

This is a type of arthritis that tends to affect lower limb joints and occurs after exposure to certain infections. The infection, often of the gut or an STD, results in a triggering of the immune system 2-4 weeks later resulting in a painful arthritis and, sometimes, skin rashes and eye pain. The condition may be quite debilitating for a few weeks or months but then settles spontaneously.

Gout is rapidly becoming the commonest of all the inflammatory arthropathies.

Whereas the aforementioned conditions are mediated through the immune system, gout is caused by the deposition of uric acid crystals in and around joints. Uric acid is a breakdown product of normal purine metabolism and is excreted via the kidneys. Some individuals have an impairment of the kidney’s transport mechanism that handles uric acid, resulting in retention of uric acid in the body.

If the blood uric acid level is high enough, uric acid crystals become deposited in joints and soft tissues. From time to time, the crystals can cause an intense inflammatory reaction within a joint, usually the great toe joint, knee or ankle. These gouty attacks are miserable, patients can barely weight bear and sleep is disturbed. An attack often starts at night and tends to last 2 days to 2 weeks.

For most patients, an under-excretion of uric acid through the kidney is the cause. Genetic factors are important and many patients have a family history. There is also an association with high blood pressure, high cholesterol and heart disease – all these conditions should also be addressed. Higher uric acid levels are seen in patients who are overweight and those who drink too much alcohol. Any form of alcohol can act directly on the kidney to cause increased retention of uric acid. Beer is especially bad as it is also contains purines which are broken down to uric acid.

Alcohol is a much more important culprit than food groups in gout, though offal meats and shellfish also play a role.

Unfortunately, dietary modification (reducing alcohol, offal meat, seafood and other purine rich food groups and increasing dairy produce and taking cherry juice) can only reduce uric acid levels by 10-20% which is not usually sufficient to control gout attacks. There are well tolerated drugs (Allopurinol, Febuxostat) which are very effective at lowering uric acid levels and preventing future gout attacks. Most patients eventually take a long term treatment, but it depends on the individual patient and how often they have an attack. An acute attack is best treated with an anti-inflammatory drug, a short course of steroids or a cortisone injection.

We commonly encounter some important mistakes in the management of gout –

Pseudogout is less common than gout and is due to deposition of a different crystal called calcium pyrophosphate. It tends to start after middle age, whereas gout can occur at any age (though it’s rare in the premenopausal woman). The knees and wrists are most frequently affected and the clinical presentation is very similar to gout, as the name suggests.

There are some associations that include thyroid disease, diabetes and hyperparathyroidism but there is no specific treatment for pseudogout. Attacks are best treated with a short course of an anti-inflammatory drug or a cortisone injection.

This is the commonest arthritis, usually starting in the middle or later years. It’s more a degenerative rather than inflammatory condition and is due to the breakdown of joint cartilage, resulting in pain with activity. Important factors that predispose to OA include age, genetics, previous trauma and obesity.

The commonest affected joints are the small joints of the fingers, the thumb bases, the hips, knees and great toe joints. Occasionally there are metabolic causes that should be excluded, such as iron storage disease (haemochromatosis).

Unlike the successful advances made in the treatment of the immune-mediated arthropathies previously listed, the treatments for osteoarthritis are limited and mostly depend on symptom relief. Weight loss is crucial for patients with knee OA who are overweight and the use of exercise programmes and foot orthoses to correct biomechanical issues are very helpful. Intra articular injections of steroids or hyaluranate derivatives can be effective and are much safer than generally considered. “3 steroid injections in a lifetime” is a bit of a myth. Hand exercises can be very helpful for patients with difficult hand OA, as can thumb and finger joint surgery. Joint replacement surgery has been a huge advance for knee and hip OA.

Do supplements work? There may be a case for glucosamine sulphate with chondroitin, at the right dose, and fish oils but the scientific evidence is not strong.