Gout And Its Treatment

Gout And Its Treatment

The ancient condition of gout is on the increase – we are seeing more and more patients, mostly due to changes in our lifestyle. Our understanding continues to improve and yet patients are not being treated as well as they could be.

Not all patients get the right diagnosis, for a number of reasons. The classical presentation is easy to recognise: a man developing sudden onset, excruciating pain in the joint of the big toe, often starting at night. The joint becomes red, shiny, swollen and hot. An attack lasts for a few days before settling and the symptoms usually respond well to anti-inflammatory drugs. But big toe pain is not the only manifestation of this miserable condition. Other joints can be involved and we see gout affecting the knee, ankle or even the whole foot. Sometimes the appearance looks like an infection and this is a common misdiagnosis. The pain is usually very severe – when a patient thinks he’s broken his foot, without any preceding trauma, then he’s probably got gout! It mostly affects lower limb joints but we can sometimes see it in the hands and wrists. It may cause swelling behind the elbow, like a golf ball, which is called olecranon bursitis. Men of any age can be affected but it’s extremely rare in premenopausal women.

Gout is caused by the deposition of uric acid crystals in joints and in adjacent tissues soft tissues. The crystals can sheer off, resulting in a massive inflammatory response and acute gouty arthritis (arthritis being the term used for inflammation of a joint and can have numerous causes). 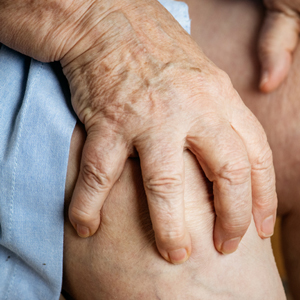 Crystals settle in and around joints due to the presence of high uric acid levels in the bloodstream. The commonest cause of a high blood level is the kidney’s inability to excrete uric acid efficiently and this is usually an inherited problem. The kidneys otherwise work well, they just have an isolated problem with uric acid excretion.

Uric acid is a breakdown product of the metabolism of purines, which themselves come from day to day cell turnover. We also consume purines in our diet and this will increase the purine load on the kidney. Purine rich foods include offal meat and seafood.

Most gout sufferers are not guilty of rich living but many are overweight due to a high calorie diet and many also drink too much alcohol. Being overweight will raise your uric acid level. Alcohol acts directly on the kidney to cause inhibition of uric acid excretion, thus raising blood levels further. All alcoholic drinks will do this. Beer has the additional problem of having a high purine content so is probably the worst alcohol drink of all. Some foods can lower the blood urate level, especially cherries and dairy produce.

The diagnosis should be confirmed by a doctor. Don’t let the doctor rely on a blood test taken during an attack of gout – the uric acid level can fall during an acute episode and is not reliable. The blood test is more reliable once the attack has settled.

There are several ways of treating an acute attack of gout, non-steroidal anti-inflammatories (NSAIDs) being the most commonly used. Ibuprofen can be bought over the counter – you will need high doses to tackle gout, 400-800mg of Ibuprofen 3 times daily, taken with food. NSAIDs are best avoided in elderly patients and if there is a history of asthma or stomach ulcers. There are other NSAIDs that can be prescribed by a doctor. I use short courses of steroids in patients with particularly severe attacks, either as tablets or by injection. Colchicine (one tablet 2 or 3 times a day) is also effective in acute gout.

Once the attack has settled, it is important to tackle the high blood level of uric acid over the long term. Dietary changes are important but do not always result in prevention of future attacks and most patients end up taking a medication to lower uric acid levels.

Once a target blood level of under 350 umol/l has been reached, the crystals will dissipate thus preventing further gout attacks. This is best achieved using a tablet called Allopurinol of Febuxostat, which act directly on an enzyme in the purine metabolic pathway thus lowering the uric acid level. Allopurinol has been used since the 1960s and is generally safe and extremely well tolerated. I have never yet encountered a serious side effect.

Gout should be easy to diagnose and it is straightforward to treat. It is disappointing that so many patients with gout are suffering unnecessarily.